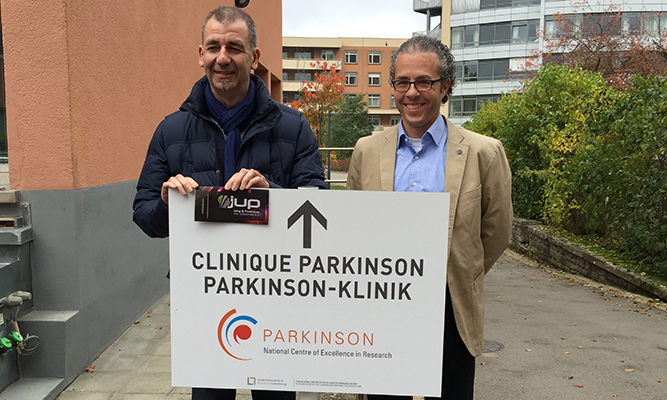 In October, the NCER-PD team has reached 100 participants in the Luxembourg Parkinson study.

The name of the 100th participant is Frank Michler, deputy chairman of the German association "Jung and Parkinson", recently awarded the Aspirin Social Award.

For him, taking part in the NCER-PD study was something natural. "The importance of such a study can not be stressed enough," says Michler, who was diagnosed of Parkinson’s disease in 2014, at the age of 41 years. "As a patient, I believe it is important to help Prof. Dr. Kruger in the best possible way I can”.

Prof. Rejko Krüger thanked the Saarland native not only for his willingness to take part in this long-term study, but also for his support in raising awareness of the research project in the Greater Region. Within the "Jung und Parkinson" association, Frank Michler took over the public relations with a lot of passion and has been working closely for several months with both the NCER-PD research team and the Luxembourg Centre for Biomedicine at the University of Luxembourg.

Frank Michler and his wife, who participanted in the study as a control person, dedicated several hours of their time to come all the way to Luxembourg. They donated blood, urine and saliva, underwent the complete neurological and neuropsychological evaluation, and answered questionnaires. "The team was very courteous, and was patient in clarifying any questions we might have. We are impressed with the expertise of your team and the high quality of the work done in Luxembourg. “ concluded Frank Michler.