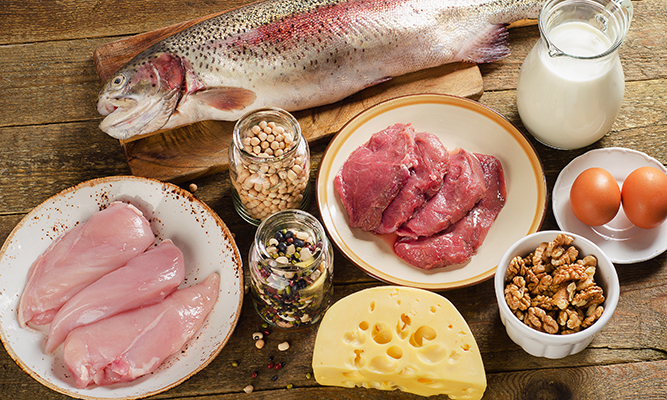 Can diet influence your treatment? New insight from computer simulation

By using computer simulation, scientists can study the interactions between protein from food, and levodopa.

For more than forty years, levodopa has been the gold standard for Parkinson’s disease treatment. It is used to restore the level of dopamine, the chemical messenger that is missing in the brain of Parkinson’s patients, which prevents motor symptoms. Levodopa is taken orally and certain types of diet, specifically food containing proteins, such as meat, eggs, dairy products, and seafood, can hinder its absorption in the gut. This is because the drug is transported from the inside of the gut into the blood stream via the same transporters as are dietary amino acids, the building blocks of proteins. Hence, a protein-rich diet can lead to competition for entry and less levodopa may reach the blood and then the brain. This results in fluctuations in the motor symptoms, particularly in late-stage patients.

Prof. Ines Thiele and Marouen Ben Guebila, both researchers from the Luxembourg Centre for Systems Biomedicine of the University of Luxembourg, have recently studied the biological mechanisms involved in details using computer models and investigated several dietary recommendations that could lessen these issues. “We developed a detailed model representing the human gastrointestinal tract and describing how nutrients and levodopa move through the gut and are absorbed,” explains Prof. Thiele. This refined representation of the inner workings of the human body provides a powerful tool to answer several questions: Why are amino acids interacting with the medication? When are those interactions occurring?

“Our results suggest that particularly late-stage patients would benefit from dietary supplementation with selected food items or amino acids,” details Marouen Ben Guebila. “Their gastrointestinal transit is slower and levodopa can be degraded in their stomach and intestine. As a result, after a protein-rich meal the concentration of the drug does not reach the required level for these patients.” In agreement with clinical observations, the simulations also highlight that eating proteins only in the evening (protein redistribution diet) is more effective than reducing the amount of proteins for every meal (low protein diet).

Does it matter, which protein we eat? According to the computer model, different amino acids have different effects on levodopa absorption. Serine, an amino acid found in soybeans does not compete with the drug in the gut, but it stimulates its secretion into the blood flow and also enhances dopaminergic pathways. Hence, a serine-rich diet could increase the efficiency of levodopa and allow a better control of motor symptoms. A clinical trial with late-stage patients taking different types of diet confirmed the computer predictions.

This study demonstrates that computer models are valuable tools to design nutritional strategies: they represent a first step towards optimising dietary recommendations in quantity, composition and timing. Most of all, it underlines once again that diet is an important part of the Parkinson’s disease treatment especially in the latest stages.