RBD stands for “REM sleep behaviour disorder”, causing affected people to act out their dreams instead of lying completely still during the REM-phase of sleep. During this particular phase of sleep, the muscles are typically completely relaxed whereas only the eyes are moving rapidly (hence the name for rapid eye movements- REM).

In case of patients affected by RBD, it may result in speaking, shouting and moving during sleep, sometimes also impacting the bed partner.

According to recent studies, it is estimated that around one percent of the population over the age of 60 is affected by RBD, occurring more frequently in men than women.

Up to now, the exact cause of RBD has not been discovered. However, the mechanism of the disease is being studied, and it is thought to be due to a disruption of the functional connections between the brainstem and regions of the brain that control emotions. This leads to changes in the control over muscle activity during the REM-phase of sleep. Importantly, RBD can be associated with other neurological disorders such as Parkinson’s disease.

RBD is very rare among adults below 40 years old, as the disease occurs typically after the age of 50. For the younger population, it may occur as a part of other neurological disease such as narcolepsy, specific autoimmune disease or due to the intake of medications such as antidepressants. 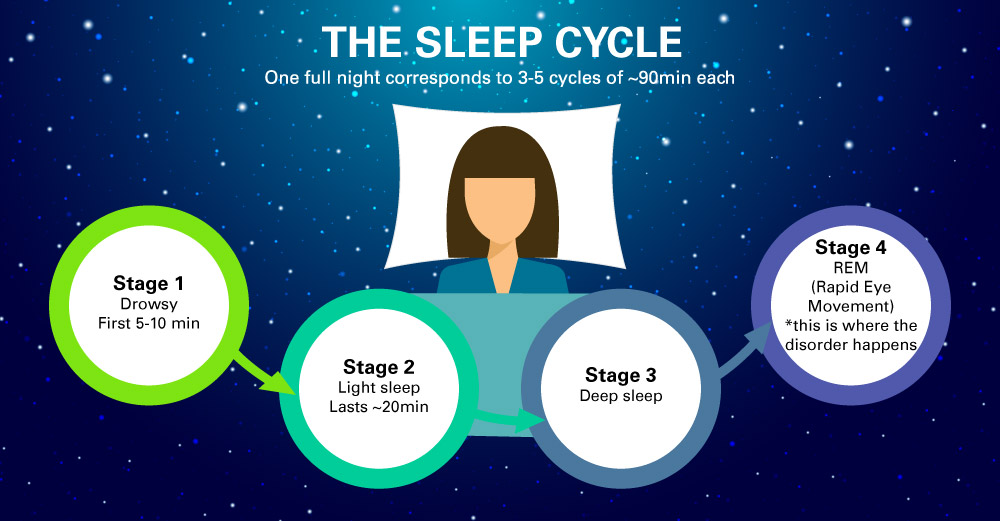 How do I know if I have RBD?

As people are not aware of their actions during RBD episodes, it is difficult to notice the disorder on your own. However, you might notice things when you wake up, such as objects in your surroundings that have been disturbed during the night. Hitting objects could also wake you up. More typically, your bed partner will report symptoms such as strong movement or speaking. It is usually possible to wake up during the episodes, where people are generally coherent, alert, they remember their dreams and can relate the body movements or gestures with their dreams.

For an RBD diagnosis, please consult a physician specialised in sleep (neurologist or pneumologist) who will evaluate the degree of probability and could eventually initiate diagnostic measures in a sleep laboratory where your body functions are monitored during the different phases of sleep.

Are there different stages of RBD?

Typically, symptoms of RBD gradually get worse, but sudden onset has also been reported. In the case of a gradual aggravation, affected people might first experience minor twitching of muscles or vocal expression, becoming more violent, with more complex gestures as time passes. Such episodes can occur once or multiple times per night, typically starting after 90 minutes of sleep which usually correspond with the beginning of the first REM-phase.

At what age can you develop RBD?

The onset of symptoms indicating RBD has been reported throughout all age groups. However, its occurrence within the population increases with age. People are most commonly diagnosed with RBD between 60 and 70 years old, after reporting symptoms for several years.

Thus, the Luxembourg RBD study focuses on participants over 55 years old to be able to better compare the results between the different participants and due to the low estimated RBD prevalence below this age.