An international collaboration involving researchers from the Luxembourg Centre for Systems Biology (LCSB) at the University of Luxembourg established an association between inflammation and specific genetic mutations in Parkinson’s patients. The study, recently published in the scientific journal Brain, highlights two biomarkers that could be used to assess Parkinson’s disease state and progression. The results also suggest that targeting the immune system with anti-inflammatory medication holds the potential to influence the disease course, at least in a subset of patients.

Around 15% of Parkinson’s disease cases are related to a known genetic background, out of which mutations in the Parkin and PINK1 genes are among the most frequent ones. Thus, revealing cellular mechanisms which are altered by these mutations is crucial for the development of new therapeutic approaches. In this study, the researchers analysed the blood serum of 245 participants from two independent cohorts and showed that patients carrying mutations in the Parkin or PINK1 genes have an increased level of circulating mitochondrial DNA and interleukin 6 (IL6).

These results indicate that deficiency in Parkin or PINK1 proteins – caused by a mutation on the corresponding gene – leads to impaired mitophagy. This dysfunction at the mitochondria level causes the release of mitochondrial DNA, thereby triggering inflammation and the elevation of interleukin 6 levels in the blood. When reaching the brain, IL6 is then thought to play a role in neurodegeneration. “Our study suggests that treatment with anti-inflammatory drugs holds the potential to alleviate the course of Parkinson’s disease – at least for patients with mutations in the Parkin or PINK1 gene,” explains Prof. Anne Grünewald, head of the Molecular and Functional Neurobiology group at the LCSB and one of the two senior authors of the study. 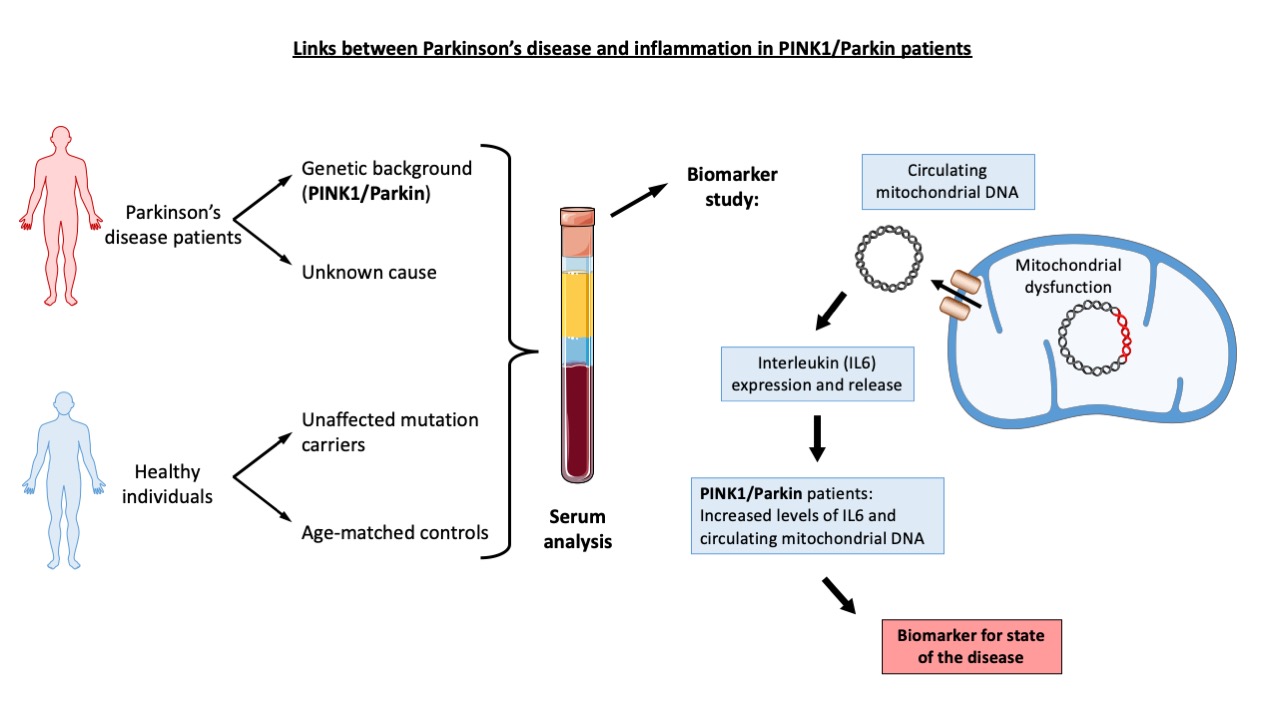 By studying the difference between patients carrying the Parkin or PINK1 mutation either on one (heterozygous) or both chromosomes, the researchers also showed that monitoring the level of systemic inflammation in the blood might be used as a biomarker for these genetic forms of Parkinson’s disease. Whereas patients with mutations in both chromosomes showed elevated levels of interleukin 6 compared to heterozygous patients, the latter still displayed a significant increase compared to healthy controls. “This tells us that heterozygous mutations also constitute a strong risk factor for the onset of Parkinson’s disease,” explains Prof. Grünewald. “Even before the disease has broken out in these heterozygous carriers, we might be able to detect it at an early stage by monitoring IL6 in the serum.” Similarly, the study showed that the level of circulating mitochondrial DNA could serve as a marker of the progression of the disease for heterozygous Parkin/PINK1 mutation carriers.

Prof. Grünewald concludes: “Our findings have a high value for potential clinical applications, be it biomarkers in the patient’s serum that detect the state of the disease or new therapeutic approaches targeting the innate immune response in Parkin/PINK1-associated Parkinson’s disease.”