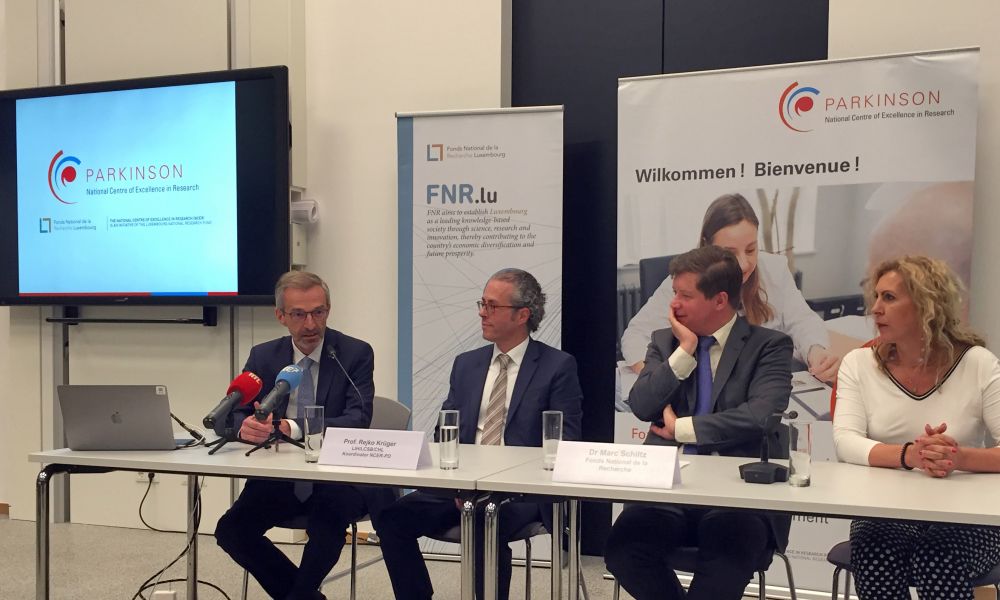 In spring 2015, the National Centre for Excellence in Research on Parkinson’s Disease (NCER-PD) was created as the very first inter-institutional research programme of its kind in Luxembourg.

It represents a joint effort between five partners that unite their complementary expertise for Parkinson’s disease (PD). The Luxembourg National Research Fund (FNR) has committed 8.3 million euros to this collaborative research programme for the past four years. At the end of this first funding period, the programme has been evaluated with outstanding scores by an international jury of experts. This paved the way for its second phase until May 2023, funded with an additional 6 million euros.

NCER-PD aims to understand the mechanism of Parkinson’s disease to enable an earlier diagnose and to develop better treatments for the patients. To achieve this, it has set itself an impressive goal: to include 800 Parkinson’s patients, hence almost all of the estimated 1000 people affected by this disease in Luxembourg, as well as having a similarly structured control group of 800 people without Parkinson’s. As of July 2019, this goal was nearly met, with some 1400 persons being part of the study. The recruitment of the missing 100 participants per group is still ongoing: patients and healthy men over 65 years of age who are not yet part of the study, are invited to join.

After four years only, the Luxembourg Parkinson’s Study is already amongst the top 7% of the largest Parkinson’s cohorts worldwide. Though, one key element makes the Luxembourgish cohort unique: all patients are being followed up annually over the years, giving the researchers unprecedented information about the disease’s progression. Initial NCER-PD research projects that study the molecular content of the blood as well as microbial composition and function in the gut show differences between people with and without Parkinson’s disease. As a next step, these first promising results need to be evaluated for use in the clinic as diagnostic biomarkers.

Patient empowerment as a key element of the study

Despite the long-term research endeavour, NCER-PD strives to already give an immediate return to the patients. Patient empowerment is hence, a key element of the study. “Through communication campaigns and close collaboration with patient associations in Luxembourg and the Greater Region, we informed patients, but also the general public, about the disease, its treatment options and current state of research. This plays an important role in reducing stigmatisation of people with this chronic disease”, says Professor Rejko Krüger, FNR PEARL Chair and coordinator of NCER-PD.

Over the last four years, NCER-PD has successfully worked together with doctors, psychologists, nurses, biomedical and computational scientists. By creating ParkinsonNet, an integrated care programme for Parkinson’s Disease based on a Dutch concept, multidisciplinary teams now also come to action in healthcare, for the sole benefit of the patients. Hopeful that these concepts could soon also be applied to other disease areas in Luxembourg, Krüger says: “The very positive development of NCER-PD is a great opportunity, as Luxembourg can serve as the testbed for the medicine of the future, for novel and more personalised therapies.”

Focus on patient stratification and therapies in the second phase

The second four years funding period will mainly build upon the obtained findings and scientific results, with a focus on further stratification of the cohort. Patients will continue to be monitored annually, as the longitudinal data will be essential to study the progression of the disease and to find new biomarkers. Also, NCER-PD will, for the first time, create a sub-cohort based on genetic analysis. Patients that carry mutations in a gene called GBA have a higher risk for cognitive decline and falls compared to other Parkinson’s patients. They will undergo specific testing and personalised clinical trials on nerve cell cultures derived from their skin samples in a quest for new therapeutics. Furthermore, NCER-PD will develop an “at-risk” cohort of people with REM sleep behaviour disorder, in which people strongly act out their dreams. As a large percentage of people with this specific sleeping problem develop Parkinson’s disease in the future, the researchers believe that close monitoring of this cohort will give insights into the onset and development of the disease.

“Parkinson’s disease is a very complex disease with many symptoms and manifestations. By studying subgroups of patients, as we have planned for NCER-PD’s second phase, one can better understand the underlying mechanisms and contribute to the development of tailored therapies”, concludes Krüger.

Marc Schiltz, Secretary General of the FNR states: “The National Centre of Excellence in Research on Parkinson’s Disease is a wonderful example of how research in Luxembourg can achieve outstanding international visibility and at the same time produce a direct impact on healthcare, by bringing together patients, researchers, doctors, and healthcare professionals.”