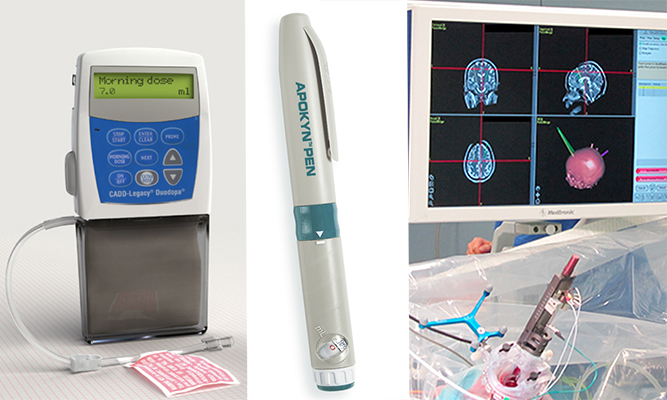 Parkinson’s disease is a disorder that generally progresses over the course of the years. Particularly, for patients at advanced stages of the disease where treatment options had previously been limited new therapies have emerged on the market in recent years.

Prof Dr Rejko Krüger, neurologist at the Centre Hospitalier de Luxembourg and researcher at the Luxembourg Centre of Systems Biomedicine of the University, and collaborating neurologists from Germany have published a review paper on the existing therapies and patient-centered care for the advanced stages of Parkinson’s Disease last month in the scientific journal Journal of Neural Transmission.

“Most people know about Levodopa tablets as treatment for Parkinson’s disease. But there are many more options available, particularly if L-DOPA doesn’t show the desired effect anymore. In the article, we wanted to provide a detailed overview of the treatment options, under which criteria patients can be selected for them in order to apply the most appropriate and effective treatment for improved quality of life“, explains Prof. Dr. Rejko Krüger the aim of the study, which focuses on treatments like levodopa application to the gut, the application of the drug apomorphine under the skin and deep brain stimulation.

Application of Levodopa to the gut

Patients experience motor fluctuations under treatment with Levodopa tablets mainly due to varying delivery of the substance to the brain. Therefore, the same compound can be applied directly to the site of uptake, as a gel (Levodopa-carbidopa intestinal gel (LCIG)) that is delivered directly to the gut via a pump that can be worn in the jacket. Here levodopa is continuously absorbed, reduces motor fluctuations and can also improve non-motor symptoms (e.g. sleep, fatigue, pain, etc). Besides circumventing complications that could arise after PEG-surgery or from the device, weight and the levels of vitamin B12 should carefully be monitored in patients. “The LCIG therapy is recommended for patients suffering from advanced PD, and it should be administered as soon as motor symptoms can’t be controlled by pulsatile oral medication”, explains Krüger. “Patients usually adapt quickly to the size and weight of the pump. Fine-tuning the rate of infusion is depending on the patients needs and requires some days until stable dose is established.”

Apomorphine is a drug already known for a long time in PD treatment, however oral administration appeared not feasible due to high doses needed and obvious side effects. However, single injection of apomorphine under the skin or continuous administration through a pump is highly effective in PD patients, when conventional oral medication has been shown ineffective and motor fluctuations occur. “Single apomorphine injections via a pen can be considered as a rescue medication in case of so-called ‘off’ phases in which moving is particularly difficult. For more complicated stages of the disease the Apomorphine pump has proven effective to suppress motor fluctuations and improve quality of life of patients,” says Krüger.

Due to the loss of the dopaminergic neurons in the substantia nigra, a certain area in the mid-brain becomes hyperactive and hence promotes the motor problems typical for Parkinson’s disease. Deep brain stimulation (DBS) electrodes can be surgically implanted in these hyperactive areas of the patient’s brain and treat symptoms via electrical impulses that act like a break for overactive neurons. A pacemaker placed in the patients’ chest generates these electrical impulses that are transmitted to the brain, thereby allowing reversible modulation of those areas and relieving motor symptoms, such as dyskinesia, and improving non-motor symptoms.

DBS became an established treatment for advanced PD by improving motor functioning and the motor complications of long-term levodopa treatment. “All patients considered for DBS undergo detailed neuropsychological and psychiatric assessment in order to define the cognitive functions and potential psychiatric comorbidities, as those could aggravate after surgery, “says Krüger. DBS generally improves tremor, but also slowing of movements and increased muscular rigidity. Although widely used for patients that suffer from Parkinson’s disease for more than a decade on average, a recent study with participation of Krüger’s team has proven that DBS can already improve the quality of life in earlier disease stages, where fluctuations just started.

According to the authors, the use of any of the treatments requires early information of patient as well as in-depth communication between patients, care givers and the treating neurologist. Recommending the apomorphine pumps, the LGIC or the DBS is highly individual and should be decided case by case, after having discussed the advantages and disadvantages of each therapy.