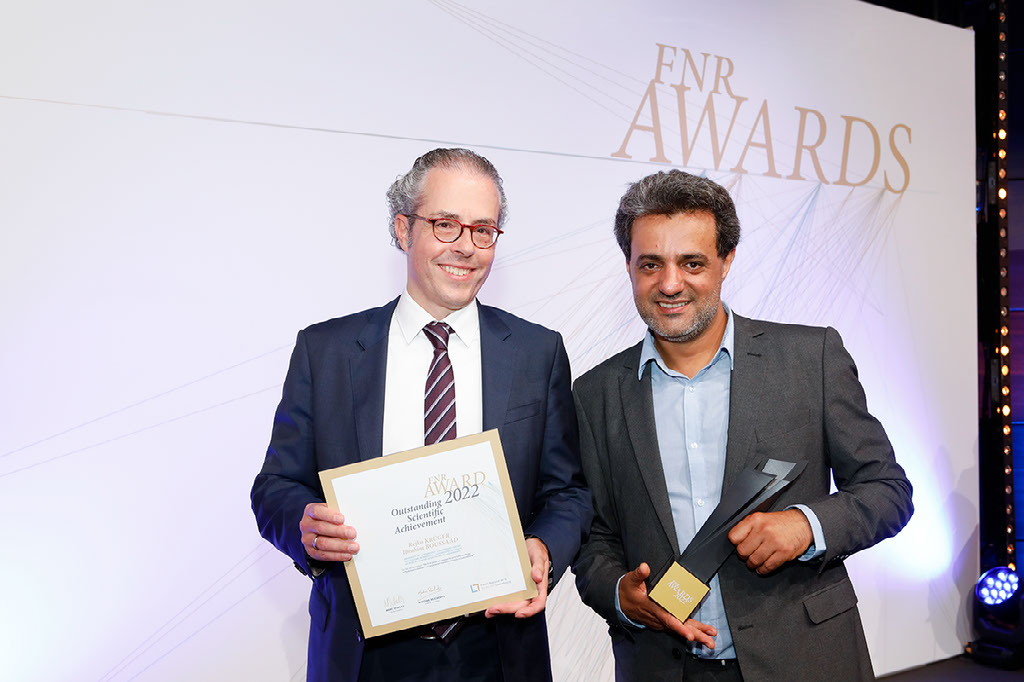 On 20 October, the Luxembourg National Research Fund (FNR) presented the FNR Awards 2022 to reward exceptional contributions to science and science communication in Luxembourg. During the ceremony, Prof. Rejko Krüger, head of the Translational Neuroscience group at the Luxembourg Centre for Systems Biomedicine (LCSB) and director of Transversal Translational Medicine at the Luxembourg Institute of Health (LIH), and Dr Ibrahim Boussaad, post-doctoral researcher at the LCSB, received the 2022 FNR Award for Outstanding Scientific Achievement.

The award was attributed to the two scientists and their team for the first proof-of-concept for precision medicine in Parkinson’s disease. This long-term translational research project resulted in the publication of scientific articles in well-known peer-reviewed journals, patents granted at the national and European level and the set-up of an inter-institutional infrastructure (LCSB, LIH) for early drug discovery that is now available to all researchers and industrial partners in Luxembourg and beyond.

The team led by Prof. Rejko Krüger uses a multidisciplinary approach to translate basic and clinical research discoveries into innovative technologies and therapies to improve the outcome for people with Parkinson’s disease. This knowledge transfer cycle from bench to bedside opened the way for the development of precision medicine in the field of neurodegeneration, meaning more targeted treatment for different subsets of patients. “Integrating a wide range of expertise across different disciplines in Luxembourg over the last years was essential to carry out and finally succeed in this extensive project,” underlines Prof. Krüger.

In a seven-year research effort, the Translational Neuroscience group, in collaboration with international partners, has clarified the cause for a genetic form of Parkinson’s disease and identified potential pharmacological treatments. The researchers first generated stem cells from a skin biopsy donated by a patient with a genetic form of Parkinson’s caused by a specific mutation. By studying neurons derived from these stem cells, they deciphered a novel disease mechanism that disrupts the processing of a protein called DJ-1 and causes neurodegeneration. “Our results opened brand new possibilities in term of causative treatment strategy,” explains Dr Ibrahim Boussaad. “We were very excited about our finding and looking forward to the next steps: developments of improved compounds for tackling the defect.”

A unique robotic platform, designed for automated cell culture and drug screenings, together with a bioinformatics algorithm developed by colleagues at the LCSB, allowed the team to identify a combination of two active substances that could repair the molecular defect in cell culture.

A subsequent large-scale analysis of genetic data showed that mutations that cause the same defect are more common in people with Parkinson’s disease than in healthy individuals worldwide. This discovery could hence have broader implications that initially anticipated. Many additional patients may indeed benefit from this treatment strategy in the future.

The LCSB researchers have now established an in vivo model presenting the same defect and will use it to study further the two compounds of interest they discovered. They are also aiming for a licencing agreement with industrial partners to further develop this targeted therapy.

An award to recognise an outstanding scientific achievement

The FNR award attributed to Prof. Krüger and Dr Boussaad highlights the exceptional scientific quality and originality of the whole project. Among the outcomes are scientific articles published in Science Translational Medicine and in Scientific Reports in 2020 and 2021, as well as patents granted in Luxembourg, in Europe and in the United States. “It is a great pleasure and honour for us to receive such a prestigious award,” says Prof. Rejko Krüger. “It is an amazing way to turn the spotlight on the seven years our team spent working on this exciting topic. And a great incentive to keep developing precision medicine for Parkinson’s disease.”